It was in 1911, the Introduction to this excellent book tells us, that the first stretch of highway along the entire California coast was built, linking Carpinteria with the Ventura River, a distance of about 16 miles. This would gradually be extended so that Los Angeles could eventually link with San Francisco. In 1913 another stretch of coastal road was built, covering the ten miles or so between Newport Beach and Laguna Beach. 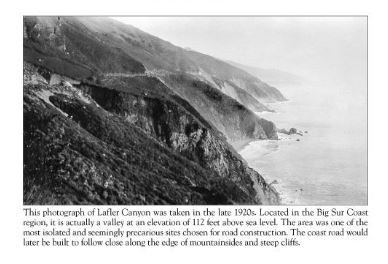 From such modest beginnings an ambitious plan emerged to build a highway linking all the communities along the California coast, all the way to the Oregon border. This would improve trade and communications, and make those scattered towns and villages less isolated, giving them easier access to each other and the big cities. 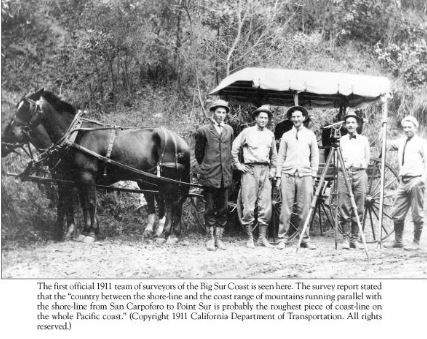 The story of the building of that highway, which became the Pacific Coast Highway, is told in this excellent and informative book about the making of America's favorite drive. The story comes alive with the inclusion of hundreds of historical photos from the archives of the California Department of Transport (Caltrans), the people who still work hard to keep the highway open when mother nature with her winter storms closes it down. 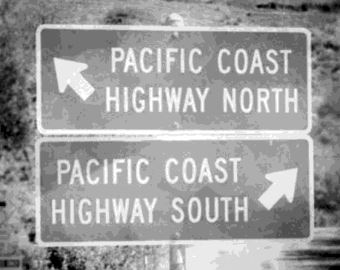 The Introduction also explains some of the amazing feats of engineering which were required in order to construct a highway along this dramatic and rugged coastline of mountains and deep gorges. One of the deepest canyons was the Arroyo Hondo near Gaviota, which required a multi-arched bridge that opened in 1918. It stood for about fifty years, by which time it was too small for the volume of traffic and the size of some of the newer vehicles, and a larger bridge had to be built.

The original still stands, though, so when you're driving the highway watch out for the Arroyo Hondo Vista Point where the old bridge now acts as a pedestrian walkway and a part of the Pacific Coast Bike Route. 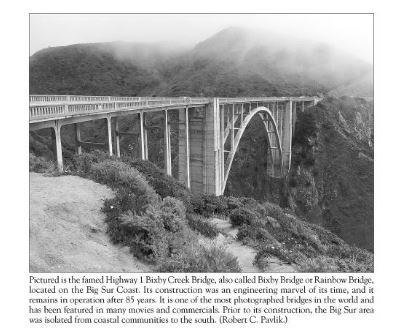 Another hurdle was at Point Mugu, where the Santa Monica Mountains came right down to meet the Pacific Ocean. Workers had to scale the cliffs and blast away 108,000 cubic yards of rock to create a way through for the road, leaving Mugu Rock standing on the ocean side to become a noted landmark along the drive. 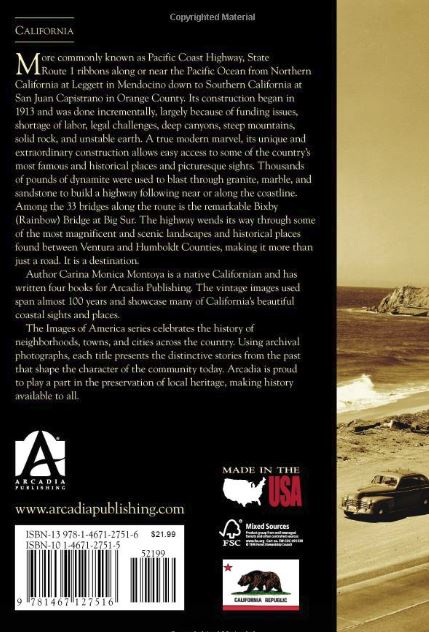 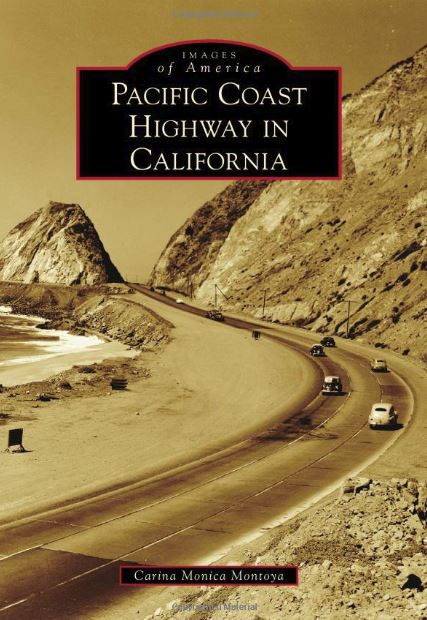 There were problems other than engineering ones to overcome. The owner of some land in Malibu refused to allow a highway to be built through her property, and refused to sell the land. The battle raged on for years in the courts till eventually she lost her case and the final stretch of the Pacific Coast Highway between Santa Barbara and San Diego opened in 1929.

Then came the hurdle of Big Sur. We could go on to fill this website with stories about the building of the highway, but then that would spoil this fantastic book for people. 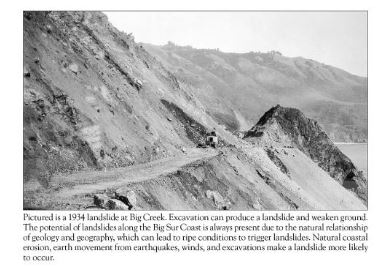 The book runs to 128 pages, and after the three-page Introduction it's photos all the way. Most pages have two photos on them, though some have only one, but they all come with captions that tell mini-stories of their own. The photos cover wildlife, beaches, highway landmarks like Santa Monica Pier, lighthouses, natural disasters (and clearing up and rebuilding after them), and lovers of old cars will have a field day with the vintage shots of early cars driving the highway.

There's no doubt in our mind that anyone who's driven the Pacific Coast Highway in California, or plans to drive it, will get something out of this book.