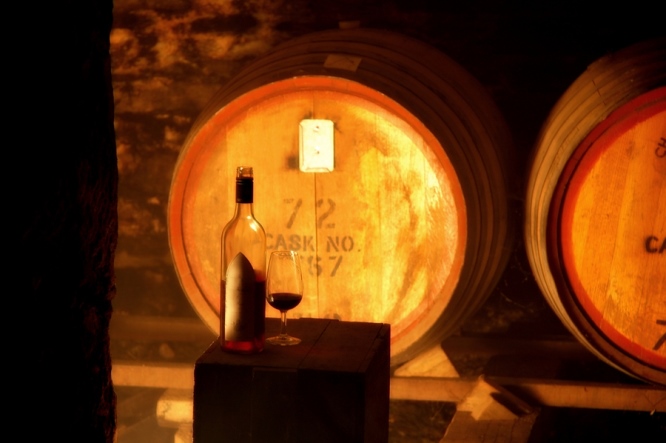 On the Pacific Coast Wine Trail

The wine trail was established by several wineries in the northern part of the Central Coast to promote wine tasting there. In California you don't need to head a long way inland to the most famous wine regions in Napa, Sonoma and Paso Robles. There are even wineries along the coast in places including Cambria, San Simeon, Harmony, and Cayucos.

There are seven wineries along the Pacific Coast Wine Trail, and many of them are family businesses with unusual stories to tell. From north to south the wineries are:

Hearst Castle is, of course, one of the top stops along the Pacific Coast Highway, but across the road from the entrance to Hearst Castle is the tasting room for the Hearst Ranch Winery. You'll find it inside the historic Sebastian's General Store, itself a place worth seeing, built in 1852.

In fact the whole story of the winery goes back to when co-founder Jim Saunders took a tour of Hearst Castle! The winery now makes a wide variety of wines, which you can try including chardonnay, rosé, tempranillo, cabernet franc, malbec, merlot, and cabernet sauvignon. The winery is hoping to open a second tasting room so check their website for the update on this: Hearst Ranch Winery.

At the north end of Cambria's Main Street, this winery's story starts with a honeymoon through the Russian River Valley wine country. The husband-and-wife team behind Black Hand, Tom and Terrie Banish, decided one day they wanted to open their own vineyard.

When it came to choosing a name, they remembered stories Tom's great-grandmother told about how her husband used to make good wine, which was well-liked by the local Black Hand Mafia. They now make syrah, grenache and several other wines. See their website: Black Hand Cellars.

Further south on Main Street in Cambria is the tasting room for Moonstone Cellars. The business goes back to 1998 when Todd Clift and his dad, Muril, began making wine as a hobby. The hobby turned into a business and now Moonstone Cellars has won over 200 awards for their hand-crafted wines. The wines range from light whites to full-bodied reds, but always made in small batches. Moonstone Cellars.

Also along Main Street in Cambria is the tasting room for Twin Coyotes. You'll find them at number 2020, as part of The Shops at the Garden Shed. This winery was started by twin brothers and only uses sustainably-farmed grapes. Wines include cabernet sauvignon, merlot, tempranillo and sauvignon blanc, plus a dessert wine. Twin Coyotes Winery.

Two miles out of Cambria on the Santa Rosa Creek Road, Stolo is a 9-acre vineyard based at a restored late-19th-century farmhouse. The family-run winery has won many awards for its wines, which include chardonnay, pinot noir, syrah, sauvignon blanc, and gewurztraminer. Stolo Family Winery and Vineyards.

Harmony Cellars is five miles south of Cambria in, where else, Harmony (population: 18) is keeping a family tradition alive. It was founded in 1989 by Chuck and Kim Mulligan, and Kim's great-grandfather, Giacomo Barloggio, was making wine in his basement in Harmony way back in the late 19th century. Today they make a range of award-winning reds and whites, and a dessert wine. Harmony Cellars.

Fourteen miles south of Cambria and in the northern part of Cayucos is the Cayucos Cellars. The company was started in the 1980s when Cayucos native Stuart Selkirk noticed a neighbor with a truck load of grapes and asked him what he was doing with them.

Making wine, was the answer, just as his Swiss ancestors had done in the old days. Soon Stuart was making wine too and he's still running the winery with his wife, their two sons and one daughter. Their wines include chardonnay, cabernet sauvignon, pinot noir and syrah. Cayucos Cellars.

Check for opening hours first, on the Pacific Coast Wine Trail website, as hours do vary.

You can download a printable map with addresses and phone numbers:
Pacific Coast Wine Trail Map

NOTE: Since its launch, two of the wineries have dropped out of the official Wine Trail but they're still operating so we've left them in here.


Where to Stay in San Simeon