The JUSTIN Vineyards and Winery

Paso Robles Wine Tours include the excellent JUSTIN Vineyard, a tour of one of the first wineries in Paso Robles with visits to the cellars and a wine tasting.

Paso Robles wine tours are a great way of seeing some beautiful California wine country, without diverting too much off the Pacific Coast Highway.

Take Highway 46 just south of Cambria and you’re very soon driving through the lovely rolling green hills of Paso Robles wine country. It’s about an hour to get to the JUSTIN Vineyards and Winery, and we’d booked onto the 2.30 tour. The fee includes both the tour and the tasting afterward

Unfortunately it started raining heavily just as we arrived, so our tour guide Brian had to switch to Plan B – an inside tour of the fascinating cave system and cellars. When it was founded in 1981 the JUSTIN Vineyard was only the 9th winery to open in Paso Robles. Today there are well over 200 vineyards and wineries to choose from.

Back then there was only a tasting room where the JUST Inn now stands, and the vineyard founders Justin and Deborah lived over the shop. They still live on the vineyard today, but now they do have their own house. 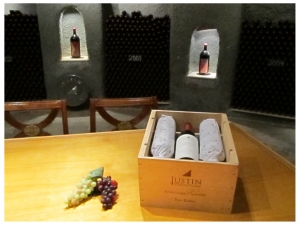 ‘The climate in Paso Robles is peculiar,’ Brian explains to us. ‘One day we had a record high of 118 degrees, but on the very same day we had a record low of 52 degrees.’ Paso Robles is a lot further south than Napa and Sonoma, so generally has hotter temperatures, but these are countered by a cooling breeze that comes off the Pacific Ocean and blows up through the valley.

On the tour we visit the Barrel Shed, which is a popular venue for weddings, and soon their chef’s dinners will be held here too. Brian tells us that some of their barrels are used for three vintages of wine, and are then turned into wood chips that the chefs in their Deborah’s Room restaurant use for smoking things like salmon. Apparently the chips give the salmon a delicious flavor.

We also get to visit the Library, a tasting room that is used for special events and where the ‘noses’ get together to discuss the quality of the wines. 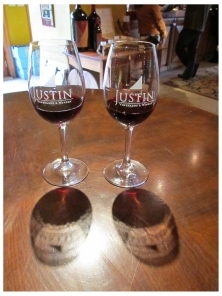 Despite the rain keeping us indoors, it was still one of the more enjoyable and interesting of the Paso Robles wine tours that we’ve done. We learned that the JUSTIN Vineyard has a Master Sommelier on staff, one of only 160 in the world, and that they make some very unusual wines. Time to taste some, then!

Wine Tasting at the JUSTIN Vineyard

One thing we really appreciated on this Paso Robles wine tour was how attentive the staff were at the tasting afterwards. The Tasting Room was packed when we arrived there at the end of the wine tour, and all the tasting stations were occupied - presumably people had decided to escape the rain and drink wine instead! And who can blame them?

We hung about at the back for a bit, as you do, but one of the staff noticed us right away and turned another of the barrels into a tasting station for us. He brought us the notes and the first tastings, while simultaneously looking after several other people. We noticed the same thing happen again and again. The room kept getting busier, but every new arrival was spotted, greeted, and set up with somewhere to taste the wines. Definitely gold medals to the staff.

And top wine too. They make some distinctly different wines at JUSTIN, a few with unusual triangular names, like Obtuse and Isosceles. The modest tasting fee allows you to sample five of the wines, and includes rather a nice wine glass with the JUSTIN logo on it for you to keep.

On the day we were there the sampling wines were the 2010 Sauvignon Blanc, 2009 Reserve Chardonnay, 2009 Cabernet Sauvignon, the 2009 Syrah, and finally the 2008 Isosceles. The last one normally retails at $62 a bottle. It was a rich ruby-red blend of mostly Cabernet Sauvignon and Cabernet Franc, with some Merlot and a dash of Petit Verdot. It has a hefty 15% alcohol, giving it the feel of a fortified port wine, and was worth the tasting fee alone.

We enjoyed all the wines, and were relieved we didn’t have to make an instant decision about what to buy. We were staying on the vineyard that night so could return to the tempting shop in the morning, after sampling even more of the wines over dinner in Deborah’s Room.

The JUSTIN Vineyards and Winery has tours daily at 10.30am and 2.30pm. Reservations are recommended as numbers are limited. Tours last roughly 45-60 minutes, and change with the seasons depending on what’s happening in the vineyard. These Beginning Tours include the tasting of a range of their current wines.

At 3.30pm daily there is also an Intermediate Tour, which is for more advanced wine palates, and on certain Saturdays in summer a ‘Just the Reserves’ tour. There’s also an Advanced Tour, described as the Ultimate Wine Experience, with the winery’s Master Sommelier but with a minimum of four people. Full Tour Program details are available on the JUSTIN website.


Watch our YouTube Slide Show of the Vineyard Tour,
Tasting Room, and our Stay at the JUST Inn too