Olympic Peninsula wineries are not in the heart of Washington wine country but they produce fine wine and these vineyards near the Pacific Coast Highway and the Olympic National Park are well worth a visit.

Some of them have vineyards in eastern Washington, the more traditional Washington Wine Country, and mature their wines here on the Olympic Peninsula where conditions are more favorable for developing the wine and for storing it.

Most of these Olympic Peninsula wineries are open daily in summer from about 11am or noon till about 5pm, but may close weekdays at other times of year, so always call or check the websites for up-to-date information.

Camaraderie Cellars
Camaraderie's winery is here but it gets its grapes from some of the best vineyards in eastern Washington. From these they produce a small range of quality wines such as syrah, viognier, and tempranillo, though they only make 3,000 cases a year in all, many of which are snapped up by some of the nation's top restaurants. You'll find them west of Port Angeles – just make a left onto Benson and the winery is on the right. 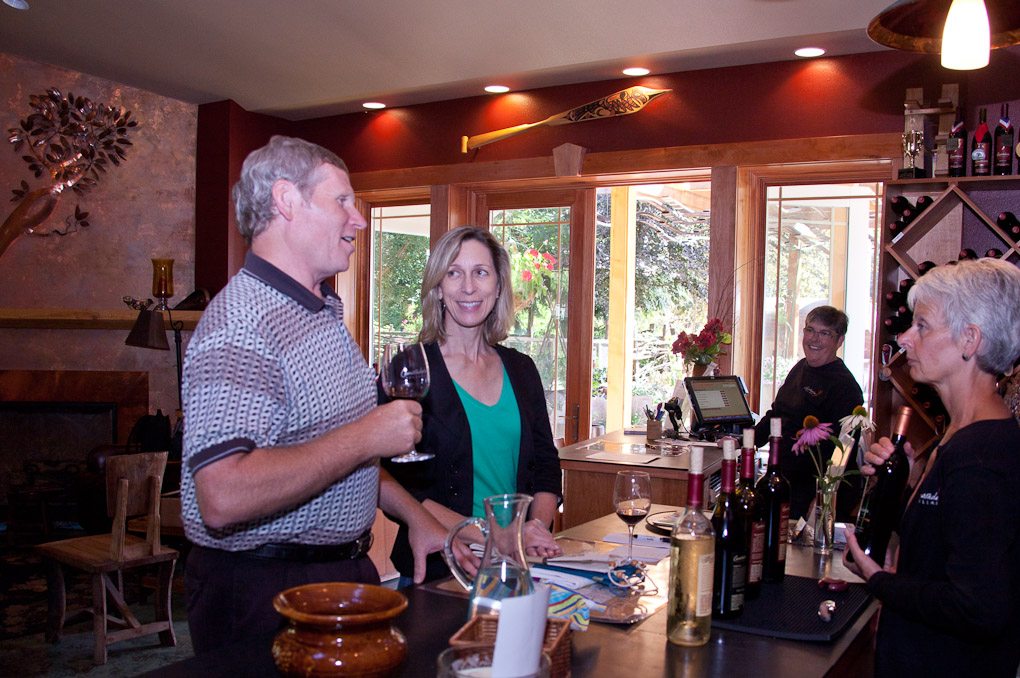 FairWinds Winery
FairWinds was established in 1993, and as well as popular wines like merlot and cabernet sauvignon, it's the only Washington winery to produce aligote (a white Burgundy) as well as lemberger, blush, mead, gewurztraminer, and even a port wine. But then it is in Port Townsend.
1984 Hastings Ave. W.
Port Townsend, Washington 98368
Phone: (360) 385-6899

The Harbinger Winery
Harbinger makes a range of medal-winning wines from grapes grown on its various vineyards around Washington. They include a Silver Medal mix of riesling and sauvignon blanc, and a double Gold Medal red, as well as merlots, syrahs, a white Burgundy and delicious cranberry, raspberry, and blackberry wines. They're on the south side of the Pacific Coast Highway, west of Port Angeles.

The Hoodsport Winery
You'll find this small award-winning Olympic Peninsula winery about one mile south of Hoodsport, on the picturesque Hood Canal and with views of the Olympic Mountains. It was an early pioneer for Washington wines, established in 1978 when there were only 16 wineries in the state. They mainly produce chardonnay, merlot and sauvignon blanc in small quantities, but other varieties too and their 1994 Cabernet Sauvignon won a gold medal at VinExpo in France. They also make raspberry, rhubarb and loganberry wines, and their raspberry wine has also won several awards. Contact them for visiting details and to learn about their special events.

Olympic Cellars
The Olympic Cellars Winery was the very first of the Olympic Peninsula wineries, and one of the first 15 wineries established in Washington State. Since 2001 it's been a women-owned and women-operated winery, and producing quality wines but with fun names like Go Girl Red, Working Girl White, and – our favorite – Rosé the Riveter. Check the website to confirm opening times and to find out if they've any special events on. This is a winery where the girls just wanna have fun.

Sorensen Cellars
Sorensen is a small family Olympic Peninsula winery producing limited numbers of award-winning premium wines, including merlot, syrah, viognier, and cabernet franc. They're about a mile south of Port Townsend in the Glen Cove Industrial Park. Not the usual kind of winery address, but don't let that put you off. These are some fine wines.

At the Harbinger Winery