Stanford Inn by the Sea
in Mendocino

When we arrived at the Stanford Inn by the Sea near Mendocino, we'd no idea what a very special place we'd be staying at. A few days earlier someone had been telling us some of the things we absolutely had to do when driving further north, one of which was dining at Ravens' Restaurant in Mendocino. She said it had some of the finest food she'd ever tasted. We wrote the name down, now knowing then that Ravens' is the restaurant for the Stanford Inn. So at least we knew the food ought to be good. 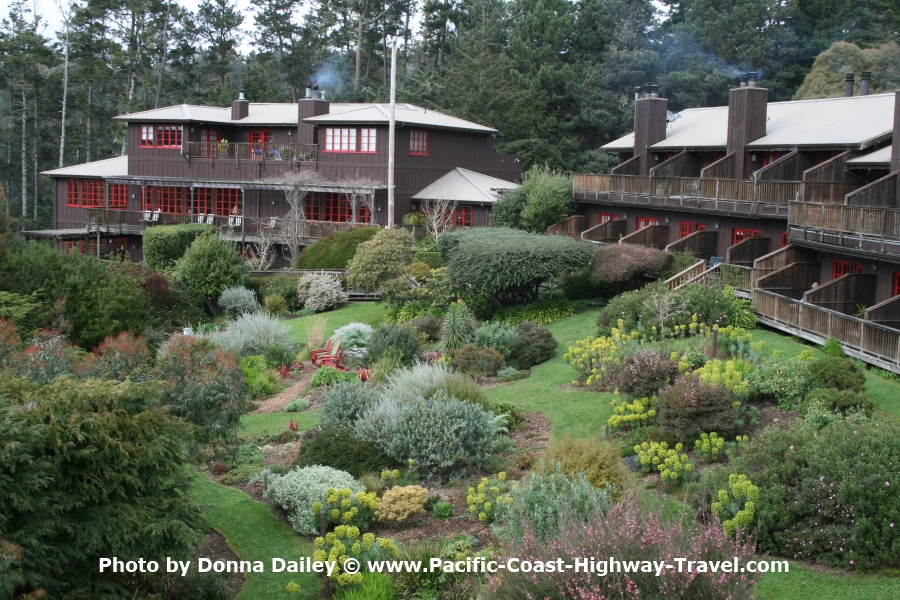 Rooms at the Stanford Inn
The Stanford Inn style is rustic comfort. Rooms have wood-panel walls, real wood-burning fireplaces, eco-friendly toiletries, organic coffee-making facilities, and they all have their own decks. Many have views out to the Pacific Ocean, across the Inn's herb and vegetable gardens. But rustic doesn't mean basic. Rooms also have wireless internet, HDTVs with DVDs and VCRs, fridges, microwaves, and stereo systems, and ours had one of the biggest and most comfortable beds you could wish for. Room rates also include the exceptional breakfast at Ravens' Restaurant.

Mendocino Eco-Resort
The Stanford Inn describes itself as an eco-resort, which is a claim that everybody under the sun makes these days. Any hotel that asks you to re-use your towels claims it's being eco-friendly. But in the case of the Stanford Inn it is built into the very fabric of the place, and is simply a part of the way of life of the owners, Jeff and Joan Stanford. We were lucky enough to talk to Jeff, who introduced himself to us in Ravens', and we had a fascinating time talking to him after dinner about his beliefs and his life. He's a passionate man whose passions are reflected in the way everything is done at the Stanford Inn.

Canoes and Bicycle Hire in Mendocino
Within the grounds of the Stanford Inn is the only privately-owned stretch of the Big River estuary, now known as the Big River State Park. Here you can hire kayaks and redwood outrigger canoes to explore this protected part of the beautiful coast. Bikes are available for hire too, with the Big River Trail just one of the cycling options.

Other Amenities at the Stanford Inn by the Sea
Yoga classes are available for guests, and there's a range of massage, facials and other treatments that can be booked. Ayurveda Treatments and Acupuncture are also part of the services available, with a hidden-away Massage in the Forest centre in the Inn's grounds. There's also a hot tub and a delightful indoor swimming pool.

Don't only take our word for it, click on this link
to read the mainly 5-star reviews
for the Stanford Inn on TripAdvisor

In all there are over 200 hotels listed, complete with 8 pages of color maps showing the towns where our recommended hotels can be found. There are both alphabetical and geographical indexes, helping you plan your journey.

We also include color photos of all the hotels that are our Personal Favorites. Here's the link to read more about our ebook guide to Pacific Coast Highway hotels.

KINDLE EDITION
The 2018 edition of our Hotels Guide is available for the Kindle, with maps and photos in color, if you have a color reader. You can buy it in the US Kindle Store and in the UK Kindle Store and around the world.

PAPERBACK EDITION
If you want a paperback edition of the 2016 guide  with only black and white photos and black-and-white maps, it costs $6.99 at the US Amazon Book Store and £4.99 in the UK Amazon Store.

Find us on Google+

[?]Subscribe To This Site
Copyright 2020 by Mike Gerrard and Donna Dailey.
No words or images to be used without prior permission.
We do not sell personal information: see our Privacy Policy.
California Consumer Privacy Act - CCPA: Sale Of Personal Information
Pacific Coast Highway Travel does not sell any information it gathers for any reason. It has not collected or sold any personal information in the last twelve months or ever in the past.