The Grande Colonial La Jolla luxury hotel is downtown, close to restaurants and shopping, with historic charm, and a highly acclaimed restaurant. 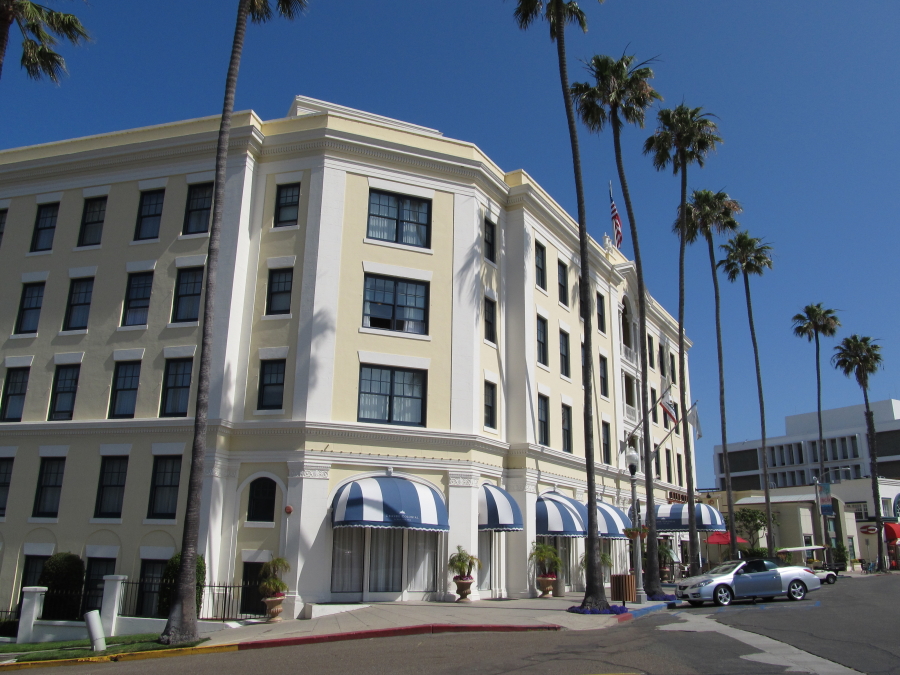 First impressions count, and we had a great one when we arrived at the Grande Colonial La Jolla, a luxury hotel in the heart of downtown La Jolla.

It was the first day of one of our Pacific Coast Highway trips, and we’d had a long and hot 7-hour drive from our home in Arizona. We appreciated, first, that the driving directions we’d copied from the hotel’s website were spot-on, and took us right to the front door.

We then liked the fact that there was plenty of space to pull up and park at the entrance, which doesn’t always happen, and the icing on the cake of our arrival was how helpful and friendly the valet parking and bell-hop guys were. They didn’t know us from Adam and Eve but immediately made us feel like VIPs.

Our Room at the Grande Colonial

The check-in was as friendly as the arrival had been, and we were soon going up to our room (which was 508) in the fabulous old Otis lift, that’s typical of the hotel’s historic charm. It was full of dark wood panelling, but was spacious too. We’ve stayed in smaller hotel rooms. We share with another guest who says to the bell-boy, ‘Someone told me the best view from the hotel is up on the 5th floor, is that right?’ The bell-boy says ‘Yes, it’s the view from the fire escape.’ And he directs the guy to it, along the corridor, past our room. 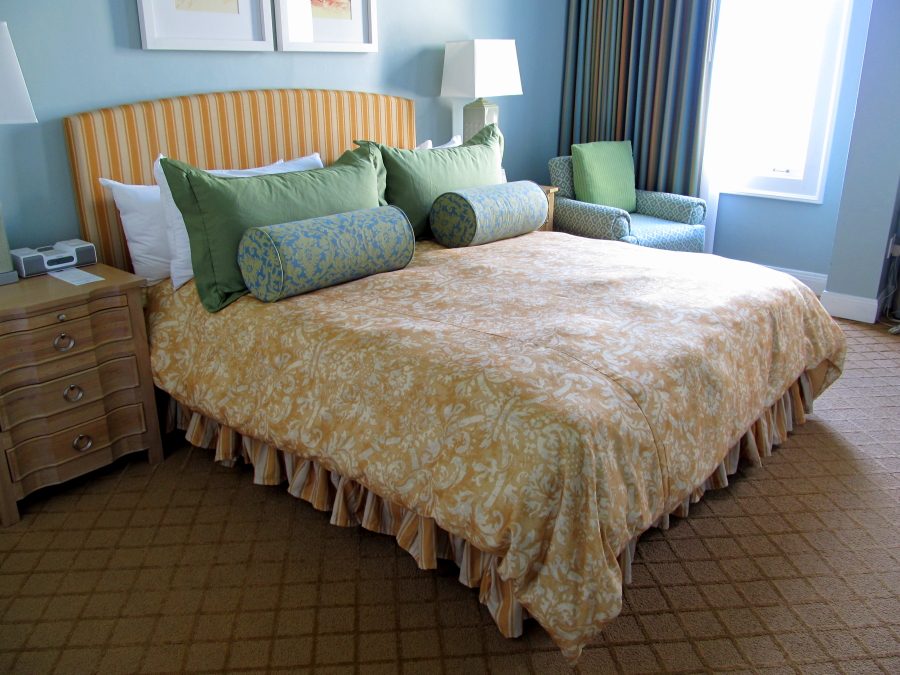 From our room we had a view of the heated pool and the Pacific Ocean in the distance. The room was spacious, with relaxing pastel colors, and a ceiling fan which gave it that colonial look. There was a TV, complimentary bottled water, a free daily paper on weekdays, and free wireless and wired internet too. Some rooms look out over La Jolla, not towards the ocean, and there are also luxury suites available, some of them in separate buildings that lead off the pool area. 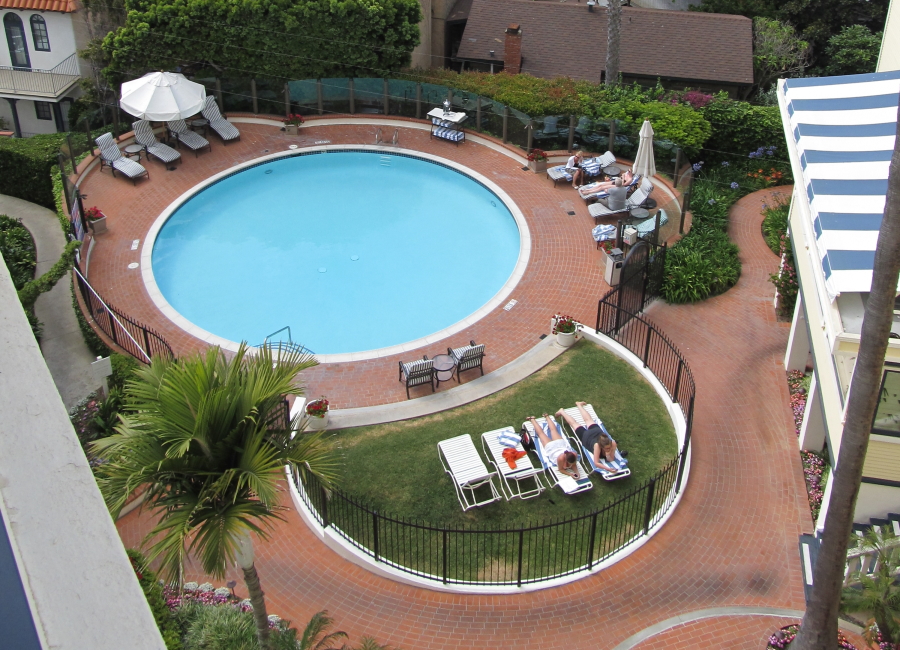 We liked the fact that the Grande Colonial La Jolla was a luxury hotel but was still very down-to-earth and friendly, with nothing ostentatious about it. It oozed that historic charm which has kept hotels like this in business for decades. The Grande Colonial is the oldest original hotel in La Jolla, going back to 1913 when it opened as the Colonial Apartments and Hotel. This means it will soon be celebrating 100 years in business – quite an achievement.

You don’t get the coveted AAA Four Diamond rating, though, just because you’re nearly 100 years old. You have to provide the service and standards that this demands, and in our two days there we saw this understated quality over and over again.

If you’re good, you don’t have to keep reminding people how good and special you are. Just get on with the job quietly, and that’s what the Grande Colonial does. We also admired all the many green initiatives the hotel has introduced. They’re not only the oldest in La Jolla, they’re one of the most eco-friendly too.

La Jolla has many fine restaurants, most of them within walking distance of the Grande Colonial, but one of the best in town is right within the hotel itself: The NINE-TEN. The restaurant opened in 2001 and was one of the first to practice the ‘farm-to-table’ concept. This quickly helped to establish it as one of the best eating places in the region, winning many awards ranging from the Best Burger in La Jolla to San Diego’s Best Chocolatier/Pastry Chef. 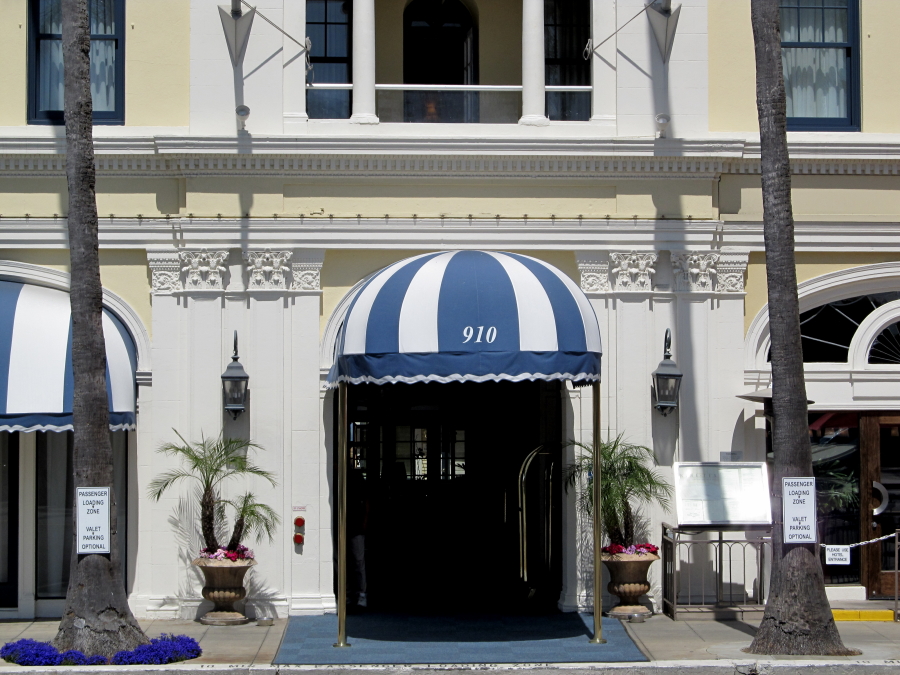 You couldn’t get a better location than the Grande Colonial, right downtown in the heart of La Jolla on Prospect Street, one of the main streets. All of La Jolla’s great shopping and its many fine and fun restaurants are within a few minutes walk of the front door. If you want an alternative to the Interstate, you can drive south from the hotel along Prospect, which becomes La Jolla Blvd, which becomes Mission Blvd, and brings you to Mission Beach, the most popular beach in San Diego.

We recommend the Valet Parking at the Grande Colonial. Normally we look for self-parking or car park options, as in many hotels the fees for Valet Parking are just an excuse to bilk the customer. But here the fees were reasonable and the only other option is to try and park on the streets: not an easy thing in pretty little La Jolla.

We Valet Parked, said goodbye to our car for two days, and walked everywhere. The bad part was having to get the car back again after two wonderful days here and hitting the road, but the Pacific Coast Highway beckoned.