The Start of the Pacific Coast Highway

Dana Point in California is the official start or end of the Pacific Coast Highway, and its attractions include whale watching, and Doheny State Beach. 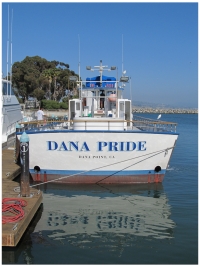 Dana Point in southern California is the official start, or end, of the Pacific Coast Highway. The PCH starts at exit 79 from I-5, where California State Route 1 begins.

The highway then takes you through part of Dana Point and then north along the coast towards Laguna Beach and the other California beach towns beyond.

There’s much more to Dana Point than just being the start of the road trip, however, and it’s well worth a night or two of anyone’s time. It’s probably best-known for its whale watching trips, and in particular its Festival of Whales. 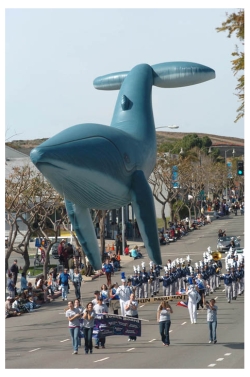 The annual Festival of Whales takes place at Dana Point usually over two weekends in early/mid-March. It’s a great time to visit, but book your accommodation ahead.

The Festival also coincides with Dana Point Restaurant Week, when there are some bargain and special meals to be had in the town’s eating places. If you’re coming in for the day from outside the town then there’s a regular shuttle service so you don’t have to get caught up in downtown traffic, and you can park and ride all day for free.

One of the Dana Point experiences you must on no account miss is a whale watching cruise with Dana Wharf Sportfishing and Whale Watching. Prime season for grey whales is from about November to April, though it can vary a little from year to year depending on the conditions.

Then from May to October, the blue whales start to be seen, making whale watching a year-round attraction at Dana Point. Read the account of our Dana Point Whale Watching trip, on a sunset cruise. 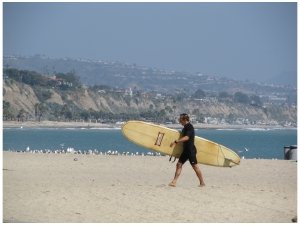 To the south side of the harbor is Doheny State Beach, the first part of a long stretch which goes all the way to San Clemente. It’s a very popular beach, with a campsite behind it that usually needs to be booked well in advance. It is consistently voted the Best Camping Site in the whole of Orange County, year after year.

It’s also a great location for anglers, and is considered one of the best surfing beaches in Southern California.

You can catch ferries from Dana Point to the totally unique Santa Catalina Island, well worth a trip of a day or two.

More Information
You can find out more about Dana Point by visiting the website of the Dana Point Chamber of Commerce.

Where to Stay in Dana Point