Cheap flights to San Diego with Southwest Airlines, JetBlue, WestJet and other airlines from Los Angeles, San Francisco, and Seattle.

In addition to Southwest, some of the budget airlines flying into San Diego are JetBlue and WestJet.

A limited number of international airlines fly direct into San Diego, and these include Aeromexico (from Mexico City and San José del Cabo), Air Canada (Calgary, Toronto, and Vancouver), and WestJet (Calgary). Alaska Airlines also flies between San Diego and San José del Cabo in Mexico, so might be worth checking out for a possible budget air fare.

The best budget fares to San Diego from within the USA are likely to be with Southwest Airlines. Southwest fly from a range of US cities including Albuquerque, Austin, Baltimore, Chicago, Denver, El Paso, Houston, Kansas City, Las Vegas, Nashville, Oakland, Phoenix, Reno/Tahoe, Sacramento, San Antonio, San Francisco, San Jose in California, St. Louis, and Tucson. Alaska also have a flight between Orlando and San Diego.

One option for driving the Pacific Coast Highway is to fly in to San Diego or San Francisco, book a one-way car rental airport to airport, and fly back from the other end. However, one-way car rentals are usually more expensive, incurring a drop fee, and it may be cheaper to drive back on the faster Interstate. As well as Southwest Airlines, Virgin America and United also fly between San Diego and San Francisco.

If you want to drive the full length of the west coast and fly back, then both Virgin America and Alaska Airlines have flights between Seattle and San Diego.

In addition to its two main Terminals, San Diego International Airport also has a Commuter Terminal. This is used by several airlines providing commuter flights between San Diego and Los Angeles. These include American Eagle and SkyWest Airlines (on behalf of both Delta and United Express).

International travelers might consider looking for a cheap flight into Los Angeles, and an onward connecting flight to San Diego. 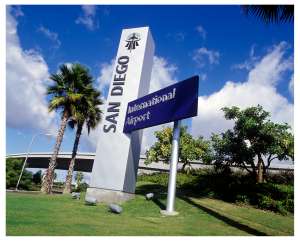 San Diego's main airport is San Diego International Airport (code: SAN; tel: 619/400-2400; website: http://www.san.org), also called Lindbergh Field. It's located only about three miles from downtown San Diego, and there are several shuttle, taxi, and bus services into the city from the airport.