We’d been whale watching elsewhere in California, in San Diego and at Dana Point, and each time we had seen some whales, but would we be so lucky in Santa Barbara?

We’d booked on a 9am cruise, but unfortunately that had to be cancelled. We re-booked on one leaving at noon, but halfway through the morning the mist rolled in and after a sunny start Santa Barbara was suddenly enveloped in fog. I phoned Condor Express but they assured me the whale watching cruise would still be leaving: ‘The mist’s only on land. Out to sea it’s still good visibility.’ 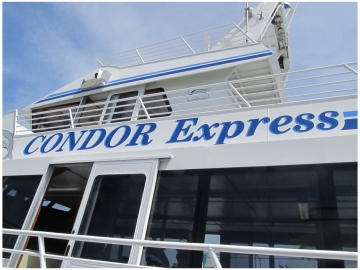 One thing to try to be careful about when booking a whale watching cruise is to choose a company that’s sensitive to the whales, and the rest of the wildlife you’ll encounter. We were reassured by the fact that Condor Express had two naturalists on board, Debby and Cubby, and Cubby said: ‘We choose to come on this boat because it’s built especially for wildlife watching. They say the Santa Barbara channel is one of the best places in the world for whale watching. Today we’re looking for grey whales and lately we’ve been seeing a lot of mothers and calves. Mat is the captain and he’ll do his best to find you some whales today.’

The Captain explained that the boat doesn’t use radar or sonar to find the whales, as this also disturbs them and that’s not what you want especially when mothers and calves are passing by, as they were right now. They rely only on seeing the whales, and we had to play our part by keeping our eyes peeled all around the boat, and yell and point if we saw anything. 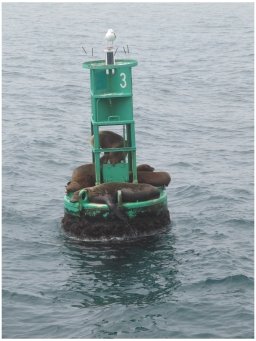 We stopped to watch some harbor seals flopping on a buoy, with some cormorants and pelicans bobbing around nearby too. And then, only ten minutes later, we had our first sighting! A calf broke the surface once or twice, only briefly, but we did get a look at it – though it wasn’t long and steady enough to get good photos, and the mother stayed below the surface.

We slowed the boat to try to keep pace with the direction they seemed to be swimming in, but there were no more sightings. ‘I think they either slowed down or changed course,’ said the captain. ‘They can stay under the water for several minutes, so if they change course they could come up almost anywhere and all we can try to do is guess.’

So Where are the Whales?

We kept cruising and looking and circling, heading in and out of patches of mist, but saw nothing else. If you don’t see whales – or exceptional sightings of other marine animals like sharks and dolphins - on one of these Santa Barbara whale watching cruises then Condor Express give you a voucher for another whale watching trip. (So don’t leave the whale watching till the last day of your vacation!)

Then we hit a sunny spot in the ocean, and suddenly there they were, a mother and calf. They surfaced several times, spouted several times, and we stopped to watch them. Oddly enough on the whale watching cruise we did in San Diego, it was only when the Captain decided he had to head for home that we saw the whales. 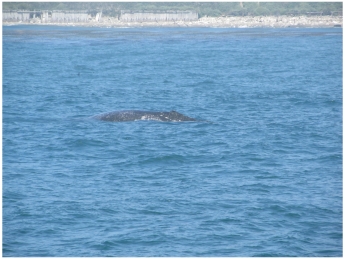 At one point the calf swam upside down, then swam on top of the mother. ‘It’s letting her know it wants feeding,’ the Captain told us. ‘The calf would have been born in Baja, fed off its mother’s rich milk till mom decided it was strong enough to make the journey north. Over the summer it will become independent, split up from its mother, and in the fall it will make the journey back to Baja either on its own or with a small group of other youngsters.

‘Anyway,’ the Captain said finally, ‘we’re already late heading back so we’re going to have to leave these guys to continue their journey and hope we’ll see ‘em again next year.’

We hoped so too, and we sailed back to the harbor thrilled at even the brief glimpses we got. We’d never before seen a mother and calf together, though what you see depends on the season as well as the weather – and luck. We had been lucky – three whale watching cruises in Southern California now, and we’d seen whales on each one. Though nothing like this, filmed on another Condor Express whale watching trip...