The Carter House Inns and Restaurant

Of all Eureka inns, The Carter House Inns are the most romantic and historic, with one of the best restaurants in Northern California. 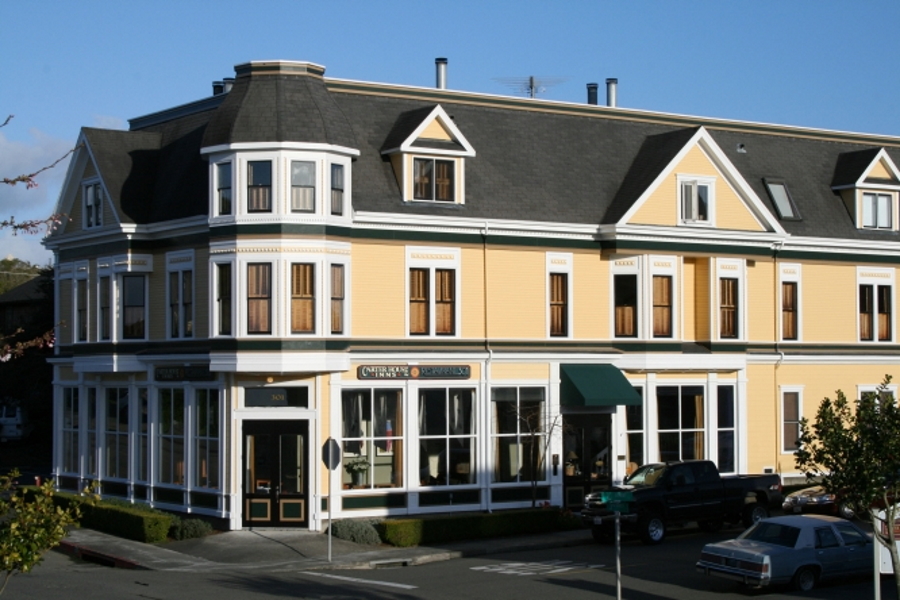 The Carter House Inns in Eureka

Of all the Eureka inns, the Carter House Inns and Restaurant must look the most impressive when you arrive. There’s the main hotel building and then across the corner are three more buildings, one of them bright yellow and all of them looking elegantly Victorian in style. It’s certainly a romantic spot to reach after a day driving the Pacific Coast Highway.

Some of the buildings are original Victorian, but the Carter House itself was built in 1982 by owner Mark Carter. He meticulously copied the plans for a house from San Francisco that had been built in 1884-5 but later destroyed in the earthquake.

It looks right at home among the other grand old Eureka inns and mansions. Mark originally intended the house to be his own family home, but construction took longer and cost more than he’d planned, and he started taking in paying guests. When we pulled up outside the buildings and said ‘Wow!’, we were sure glad that he did. 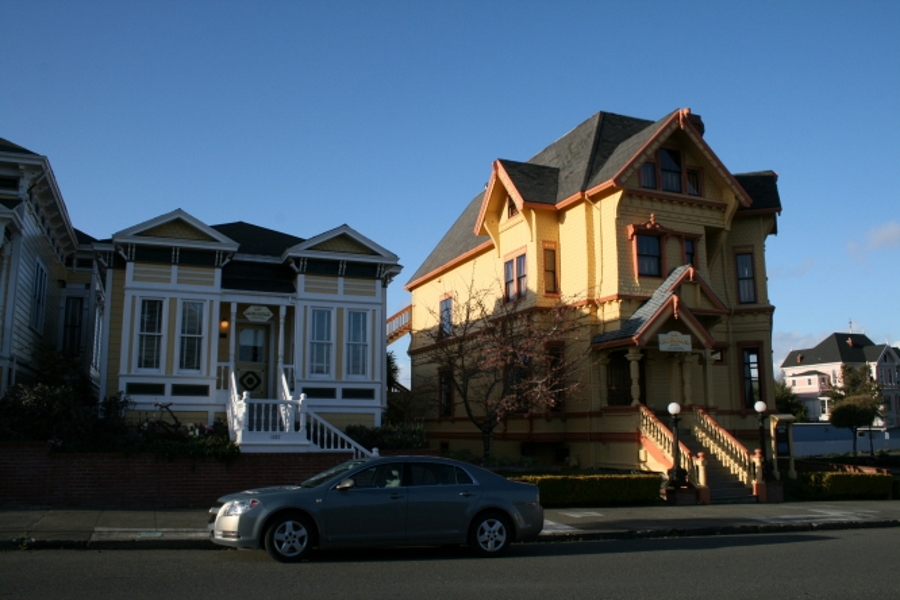 The Carter House Inns in Eureka

We’d driven from Mendocino that day, and for the later part of the drive Highway 101 veers inland, away from the Pacific Coast. But that’s no bad thing as it goes through the Humboldt Redwoods State Park, a chance to spend some time among those magnificent giant trees, definitely one of the PCH highlights.

The Carter House is easy to find, just a block or so off 101 as it goes through the center of Eureka, and we got there as the daily wine tasting with hors d’oeuvres was being held in the hotel lobby. A nice welcome.

We were keen to see our room, though, and were booked into the Carter Cottage, across the street. It was cute from the outside and huge inside. We entered into the large living and dining area, with its own kitchen and a dining table big enough to host dinner parties. You can book the Cottage to do that if you wish, and the hotel’s award-winning Restaurant 301 will do the catering for you. (We decided to make life easier and would wander over to them to eat.) 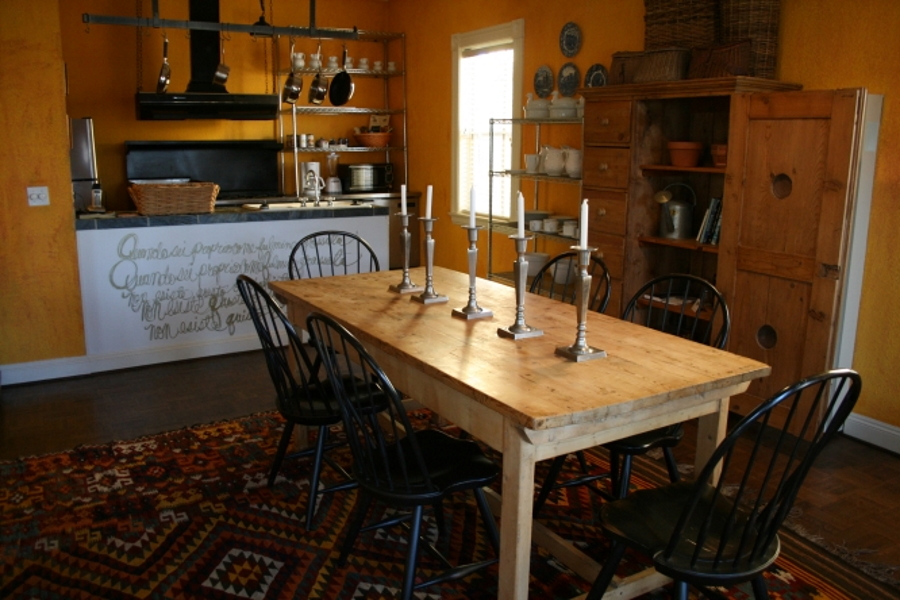 The Cottage managed to keep a historic feel, with fireplaces, wooden floors, and a four-poster bed with drapes around it, but it was set off by stylish modern touches, with carvings and statues, and of course all the modern comforts - two bathrooms, a two-person deep jetted tub, beautiful toiletries, and high-speed internet. 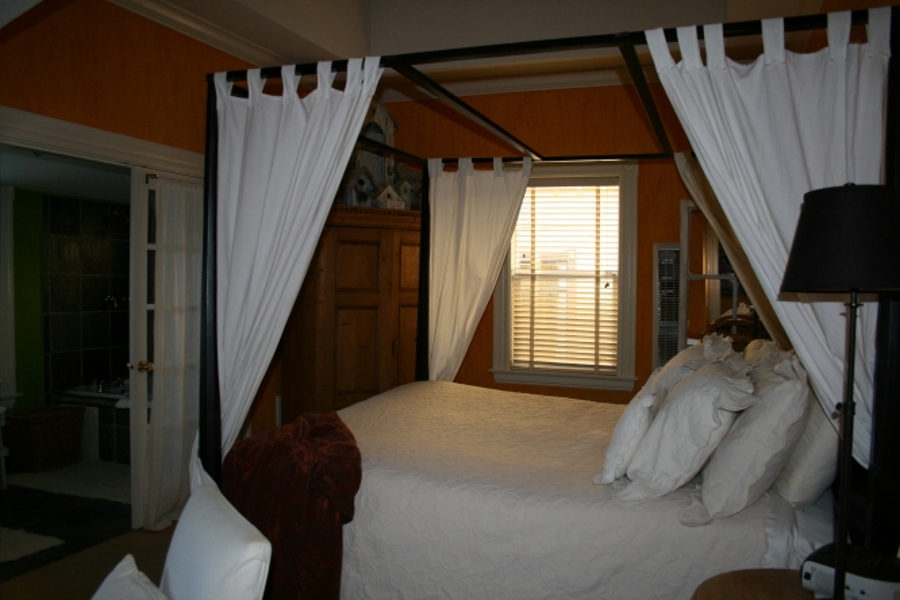 As well as the Carter Cottage the inn also has the Bell Cottage, next door. This was built in 1890 and beautifully restored in 1992. This is a cottage for slightly larger parties than the Carter Cottage, as it has three suites but also has a full kitchen for anyone wanting to self-cater or have dinner parties catered by Restaurant 301.

At the end of the row is the original Carter House, where the inn was first located before moving across the street. The Carter House has two large rooms and two two-bedroom suites.

The main hotel building, which is also where the restaurant is, was constructed from scratch in the mid-1980s, but again a lovely job was done of making it look like it’s been there for a hundred years. Here they have a range of options from regular rooms through to luxury suites. It’s also where Restaurant 301 is located, where the afternoon wine and evening cookies are served, and all room rates include a gourmet breakfast in Restaurant 301. 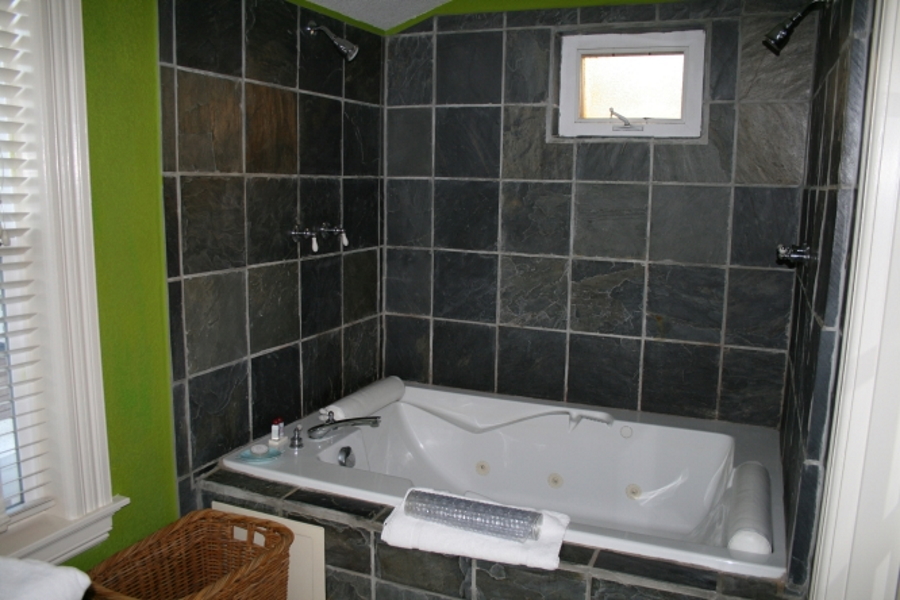 We tried not to fill up too much on the complimentary hors d’oeuvres as we’d booked a table at Restaurant 301, which Frommer’s has called ‘one of the best restaurants in Northern California’. We haven’t eaten in every restaurant in Northern Caifornia, but if you know of a better one than here at the Carter House Inn please email us.

Restaurant 301 is formal dining but in a friendly and relaxed atmosphere. It’s definitely a place for that special romantic supper, with high ceilings and plenty of space around the tables. The kitchen follows a garden-to-table philosophy, which began when the restaurant first opened almost 30 years ago and an edible flower and vegetable garden was planted. You can visit the organic garden, if you like, just down the street.

Otherwise food is primarily sourced from the best suppliers in Humboldt County, and the quality of the produce shows in the menu’s dishes. We had some wonderful flavor-filled plates such as Redwood Forest Wild Mushroom Risotto, Oregon Coast Kumamoto Oysters, and a Pot Roast Breast of Rosie Farm Chicken, with an amazingly tasty Dried Apricot, Pistachio, and Pineapple Sage Stuffing.

The restaurant’s wine list is quite daunting, as it carries almost 4,000 wines and is one of less than a hundred places worldwide to win the highly coveted Wine Spectator Grand Award. I always enjoy reading wine lists, even if I can’t afford half of them, but thankfully there’s a helpful sommelier to steer you through and also a separate list of wines by the glass if you want to try a different wine with each course, which we did.

Next morning we toured the town and saw some more of Eureka’s inns and old mansions, but we’ve no hesitation in recommending the Carter House Inns and Restaurant if you’re looking for a historic and romantic hotel in Eureka. 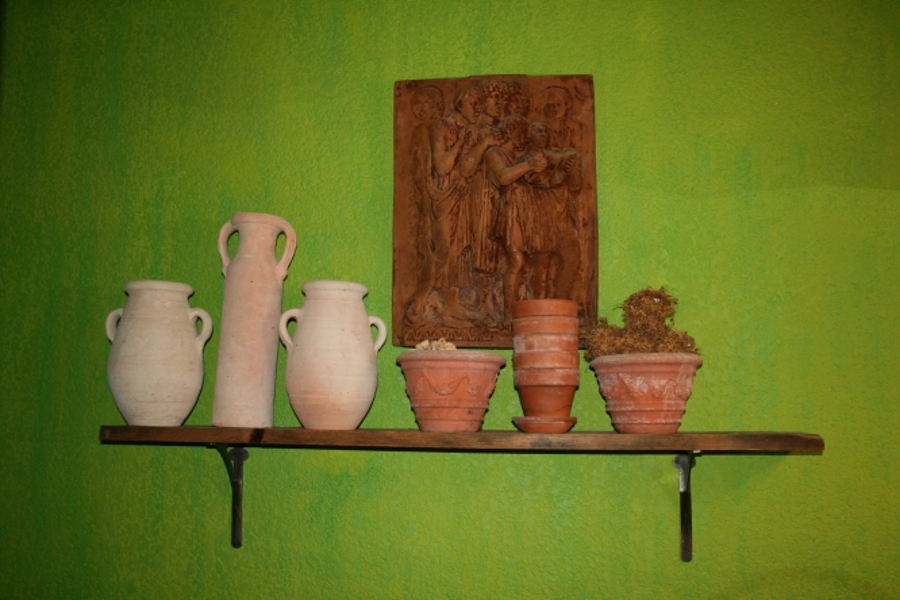 Decor in The Cottage

Unique Inns
The Carter House Inns and Restaurant in Eureka is a member of Unique Inns. For more details and for online booking information for all the Unique Inns in California, Oregon and Washington, as well as their inns in Idaho, and British Columbia in Canada, visit the
Unique Inns website.