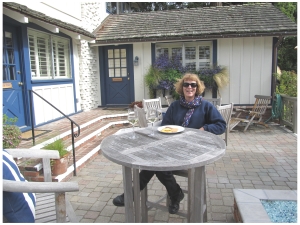 Donna Dailey (photographed at the Lamp Lighter Inn) writes on travel for newspapers and magazines worldwide, and for websites, including of course Pacific Coast Highway Travel. Her work has won several prestigious travel writing awards, and she was recently runner-up as Travel Writer of the Year. She has also written or contributed to over 25 guidebooks for major travel publishers, including some with her husband Mike Gerrard. Between them, the two also write and publish the Pacific Coast Highway Travel website.

Donna's travels have taken her down the Rio San Juan into Nicaragua’s rain forest, across the Australian Outback, to ancient sites in Jordan and Tunisia, and to the game reserves of Kenya. She has hiked across the Rockies and the desert canyons of the American Southwest, and joined in music sessions in the pubs of Ireland and Scotland. Her appetite for food and drink stories has had her eating buffalo in Denver and billy goat in the Loire Valley, sipping sherry in Spain’s bodegas, and taken her from the gourmet restaurants of Paris to Valencia in search of the perfect paella.

Donna has a Journalism degree from the University of Northern Colorado. She speaks basic Spanish. Before moving to London she worked for US publications and in television. She has been a freelance travel writer and photographer since 1993, and has worked as a Managing Editor for Insight Guides. 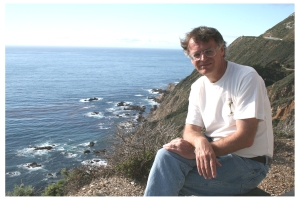 Mike Gerrard (seen taking a break on the Pacific Coast Highway) writes on travel for newspapers, magazines and websites in the UK and worldwide. He has won awards for his writing and photojournalism, including Online Travel Writer of the Year and a Benjamin Franklin Best Guidebook Award for a guidebook on Paris. He has also written or contributed to over 25 guidebooks for major travel publishers, including some with his wife Donna Dailey. Between them, the two also write and publish the Pacific Coast Highway Travel website.

Mike loves writing about food and drink for the travel pages, and has visited vineyards in France, Greece, New Zealand and even Arizona, has toured breweries in Belgium and Britain, restaurants in Paris, a chocolate shop in Lyon, the Champagne region of France and the sherry bodegas of Jerez. He worked for a week as a waiter in a taverna in the Greek islands, and as a result he now leaves bigger tips.

Mike's more exotic travels have taken him camel-trekking in the Sinai Desert, walking in the Great Rift Valley of Tanzania to raise money for charity, learning to jive in Barcelona, looking for orang-utans in the rain forests of Sumatra and staying with a farming family in China.

Between them, Mike and Donna also publish the Greece Travel Secrets, Travel Distilled, The Travel Pages, and The Vodka Guy websites.